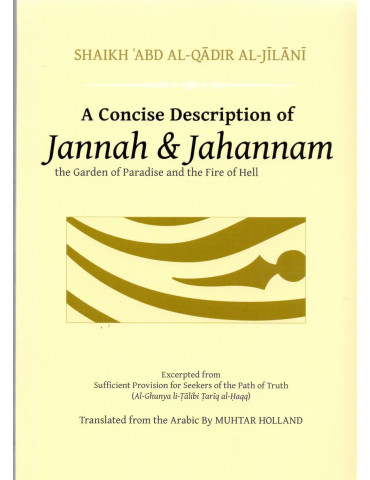 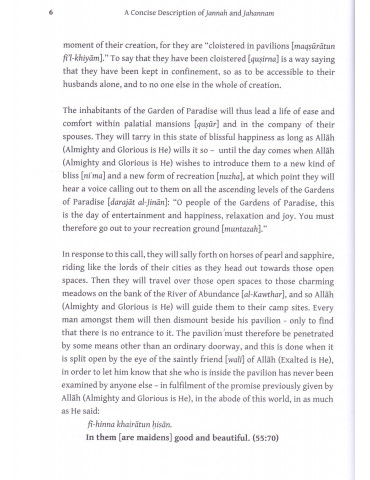 A Concise Description of Jannah & Jahannam

A Concise Description of Jannah (the Garden of Paradise) and Jahannam (the Fire of Hell) is excerpted from the larger work, Al-Ghunya li-Talibi Tariq al-Haqq (Sufficient Provision for Seekers of the Path of Truth). Written almost one thousand years ago by Shaikh 'Abd al-Qadir al-Jilani, whose eminence is universally acknowledged by Muslims of all persuasions including Shaikh al-Islam ibn Taymiyyah, it is translated by Muhtar Holland, one of the foremost translators of classical Arabic. This work will be most valuable to those who seek spiritual knowledge firmly grounded in knowledge of the Qur'an and the Sunnah.

Shaikh 'Abd al-Qadir al-Jilani In A.H. 488, at the age of eighteen, left his native province to become a student in the great capital city of Baghdaad, the hub of political, commercial and cultural activity, and the center of religious learning in the world of Islaam. After studying traditional sciences under such teachers as the prominent Hanbalii jurist [faqiih], Abuu Sa'd 'Alii al-Mukharrimii, he encountered a more spiritually oriented instructor in the saintly person of Abu'l-Khair Hammaad ad-Dabbaas.

Then, instead of embarking on his own professorial career, he abandoned the city and spent twenty-five years as a wanderer in the desert regions of 'Iraq. He was over fifty years old by the time he returned to Baghdaad, in A.H. 521/1127 C.E., and began to preach in public. His hearers were profoundly affected by the style and content of his lectures, and his reputation grew and spread through all sections of society. He moved into the school [madrasa] belonging to his old teacher al-Mukharrimii, but the premises eventually proved inadequate.

A Concise Description of Jannah & Jahannam