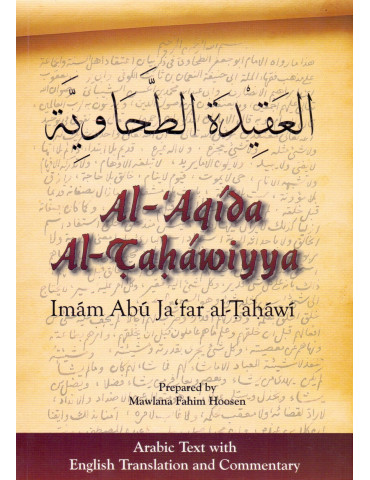 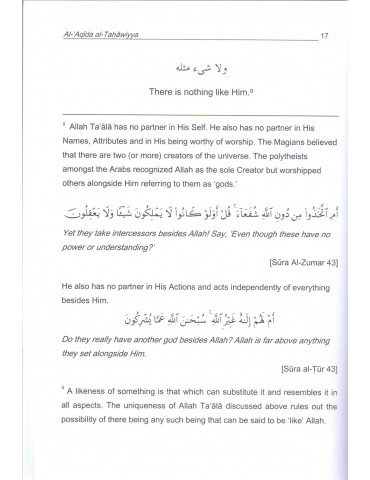 This short treatise on 'Aqida (Islamic theology) written by Imam al-Tahawi though small in size, is a basic text for all times, listing what a Muslim must know and believe.

The importance of this text lies in the fact that it corroborates the views of Imam Abu Hanifa the founder of the Hanafi school of jurisprudence, that have come down to us from different sources.  Imam  al-Tahawi summarizes  the views  of the great Imam  and  shows  that  they  were  in  conformity   with  the traditional views of the orthodox school.

The doctrines enumerated in this work are entirely derived from the undisputed primary sources of religion, the Qur'an and the confirmed hadith.

This text, representative of the viewpoint of Ahl al-Sunna wa'l Jama'a, has long been the most widely acclaimed, and indeed indispensable, reference work on Muslim beliefs.

This edition includes a brief and simple commentary by Mawlana Fahim Hoosen. The focus in his commentary is explaining the correct belief of a Muslim while avoiding technical discussions and  intricacies of debate around theological issues.

He completed a BA with Honors in Semitic Languages and Cultures at the University of Johannesburg (2008-2010) and was certified a Shariah Advisor and Auditor (CSAA) by the Accounting and Auditing Organization for Islamic Financial Institutions (AAOIFI) in 2010.

He has previously authored and published Anis al-Musafir - An explanation of the Islamic law of travel in accordance with the Hanafi School of Islamic law.