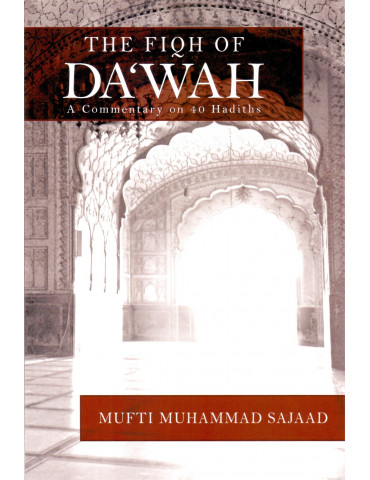 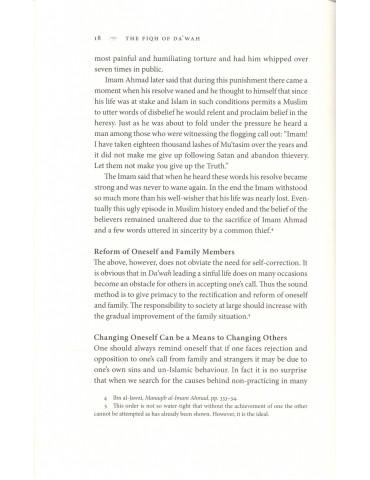 The Fiqh of Dawah - A Commentary of 40 Hadiths

There are few who will disagree that the duty of Dawah, or calling, to Islam has been severely neglected in our times when the need for it is more pronounced than ever. It is either not undertaken altogether, or if it is performed, then it is undertaken without the knowledge of the etiquette, preconditions, and general teachings that the sacred sources of Islam have provided for it. Therefore, the Da'wah is many times bereft of the results and blessings that could be attained.

The Fiqh of Da'wah attempts to explain this duty in a detailed and thorough way. It is based on a comprehensive collection of forty hadiths pertaining to the preaching methods of the Messenger of Allah (Allah bless him and give him peace) as well as his teachings regarding Da'wah to Allah. The commentary then elaborates upon the hadiths, carefully outlining the virtue, principles, conditions, and etiquette of this lofty duty. Furthermore, the work documents a number of practical examples from the lives of the pious predecessors and from those more recent, showing how they were prepared to make Da'wah even in the most inhospitable of circumstances. This work should prove an indispensable guide for anyone who wishes to seriously understand and practice this forgotten obligation in the twenty-first century.

Mufti Mohammed Sajaad was born and raised in Birmingham, UK. After obtaining a degree in Arabic and Middle Eastern Studies from the University of Leeds, he devoted his life to the study of the Islamic Sciences at Darul Uloom Karachi, Pakistan, and Darul Uloom, Bury, UK where he graduated as an Alim in 2003. Thereafter, he completed the Ifta at Darul Uloom, Blackburn

Subsequently, he attended the Markfield Institute of Higher Education in Leicester, where he studied for a Masters Degree in Islamic Finance. As part of his undergraduate studies in Arabic, Mufti Sajaad also attended Dar al Mustafa in the noble city of Tarim, a centre of knowledge in Hadramaut, Yemen. He has spent the past few years writing various articles on contemporary issues affecting Muslims, and working to disseminate knowledge within the community.

The Fiqh of Dawah - A Commentary of 40 Hadiths