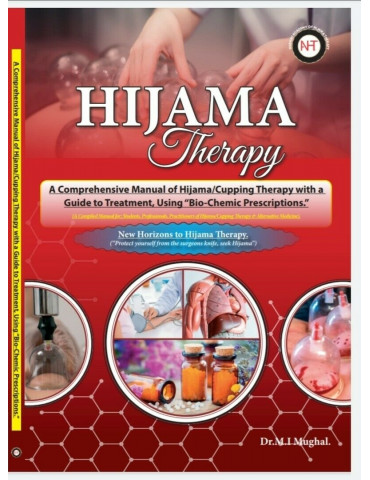 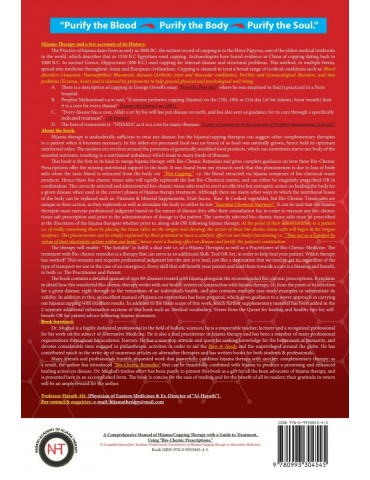 Hijama-therapy is undoubtedly sufficient to treat any disease, but the Hijama/cupping therapist can suggest other complementary therapies to a patient when it becomes necessary.

In the olden-era processed food was unheard of as food was naturally grown, hence held its optimum nutritional value. The modern era revolves around the provision of genetically modified food products, which can sometimes starve our body of essential nutrients, resulting in a nutritional imbalance that leads to many kinds of illnesses.

This book is the first in its kind to merge Hijama therapy with Bio-Chemic Remedies and gives complete guidance on how these Bio-Chemic Prescriptions offer the missing nutritional support to the body.

The book contains a detailed manual of over 80-diseases treated with Hijama alongside the recommended Bio-chemic prescriptions. It explains in detail how this wonderful Bio-chemic therapy works with our bodily system in conjunction with Hijama therapy, i.e. from the point of its selection for a given disease, right through to the restoration of an individual’s health, and also contains multiple case-study examples to substantiate its validity.

In addition to this, an excellent manual of Hijama on extremities has been prepared, which gives guidance to a newer approach in carrying out Hijama/cupping with excellent results. In addition to the main scope of this work, much further supplementary material has been added in the 2-separate additional information sections of this book, such as Medical vocabulary, Verses from the Quran for healing and healthy tips for, self-benefit OR for patient advice following Hijama treatment.

About Dr. M I Mughal

Dr. Mughal is a highly dedicated professional in the field of holistic sciences. He graduated as a Civil Engineer in 1993 from the University of Wales and continued to pursue his studies at the University of Wolverhampton, where he completed his P.G.C.E in Mathematics.

He is a respectable teacher, lecturer & recognized professional for his work in the field of   ‘Alternative Medicine’. Dr. Mughal has taught and lectured in countries other than the United Kingdom such as; Spain, K.S.A, U.A.E, and Tunisia.

He has written several books on Hijama Therapy that were comprehensive on the subject, he has received much appreciation and commendable attention.

He is also a lead practitioner in Hijama therapy and has been a member of many professional organizations and has made his contributions in the write-up of many journals on Alternative Medicine, throughout his academic Journey.