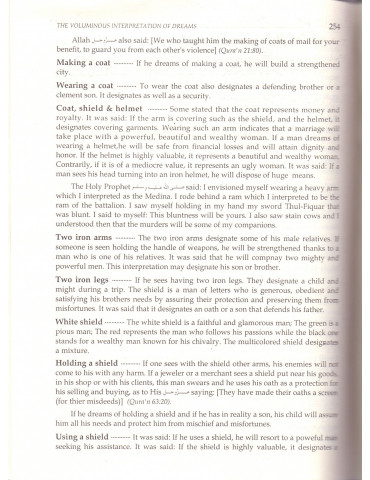 The Voluminous Interpretation Of Dreams

Pearls Of Wisdom [4 Volumes in One Binding]
Write your review

'There are three types of dreams: The reflection of one's thoughts and experiences one has during wakefulness, what is suggested by Satan to frighten the dreamer, or glad tidings from Allah. So, if someone has a dream which he dislikes, he should not tell it to others, but get up and offer a prayer."

Detailed explanations about various types of dreams as well as  what needs  to be taken into account when interpreting a dreams , when is a  dream regarded as true or false etc.

Also contains 'The Value of Dreams in the Light of the Shari'ah' by Mufti Muhammad Taqi 'Uthmani.

Ibn Sirin is one of most highly regarded Classical Scholars of the First Century Hijri, born in Basra in 33 AH. Among his contemporaries were Imam Anas Bin Malik, Al-Hassan Al-Basri, Ibn Aown, Al-Fudhayl, Bin Iyadh and Others.

The Interpretation of Dreams is a Complex Subject so this books can only be used as a reference but real interpretation can only be carried out by experts in this field as Imam Ibn Sirin himself says:

'There is no type of knowledge and wisdom which is not needed in the interpretation of dreams, even mathematics, shares of inheritance, judgements, Arabic and its strange words for the meaning of names, parables, laws of the deenand religious practices, the lawful and unlawful, the prayer, wudu', and other knowledge. Dispute in it is used as analogy and the meaning is taken from it. So the principles of commentary which you possess are more successful in interpretation than what the dreamer tells you to try to make you abandon the principles, even if you consider him to be a truthful, reliable person.'

The Voluminous Interpretation Of Dreams