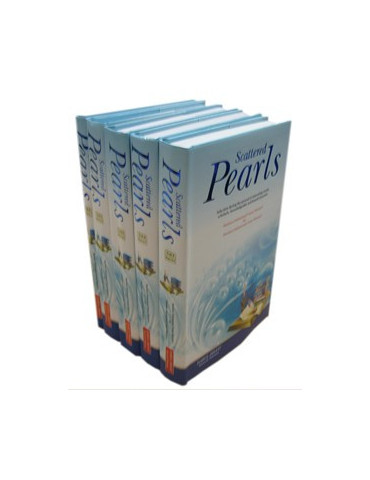 Scattered Pearls is the English Translation of Bikhre Moti, an anthology prepared from notes by Maulana Umar Palanpuri rahmatullahi alaihi, and later his son, Maulana Yunus Palanpuri damat barakatuhum - names with whom every devout Muslim in the subcontinent is familiar with.

Both of them have rendered tremendous services for the propagation of Islam, and preparing a beautiful collection like Bikhre Moti (Scattered Pearls) is yet another of those great services.

The book is based on notes taken during a continuous strive to acquire knowledge of Islam. Maulana Umar Palanpuri rahmatullahi alaihi was in the blessed habit of preserving any valuable piece of information he had acquired while studying Tafsir, Hadith, books of history, etc. in a small notebook, so that he could easily refer to it at a later time, and this habit later on was continued by his worthy son. Over the time, an immense collection of Islamic jewels came into being, each of them a rarity  - a little miracle of its own. Each pearl in this collection is an ample proof of the vast treasure of knowledge both father and son had acquired over the time. But far from keeping this treasure to themselves, they wanted it to become available to Muslims at large, and thus Bikhre Moti (Scattered Pearls) came into being.

What is Bikhre Moti? Bikhre Moti (Scattered Pearls) is a treasure trove of Quranic information, Ahadith, Fiqhi masaail, reformative discourses, quotations, anecdotes, biographical sketches, wazaaif, etc. It would not be exaggerated to say that this book has some valuable information on every topic. The discourses are not sorted in any particular, and that makes the book even more appealing, while reading the book, one finds oneself looking at one gem after the other, each different, each unique, and while turning the pages, one always wonders what jewel one is to obtain next, and that is also why this collection was named Bikhre Moti (Scattered Pearls). Complete references given towards the end of each note makes it easy to consult the original sources, thus ensuring that the reader also embarks on an individual journey in the quest of knowledge.

Since Bikhre Moti (Scattered Pearls) had found huge acceptance in its Urdu original, the need was felt to translate this book into English, so as to ensure that Muslims all over the world can benefit from this treasure trove. And now finally, the English translation has become available under the name Scattered Pearls.

The translation is faithful to the original, without compromising on standards of contemporary English language, whether it be grammar or style. Thus, a person with a refined literary taste will not be disappointed, either.

The publication itself is stunning - a beautiful cover design, high quality paper and binding, and an appealing layout and clear, easy to read fonts make this book a true treasure and an invaluable addition to the library of every book lover. Whether as a personal acquisition or gift to someone whom one truly values, this book will be an enrichment in more than just one sense.