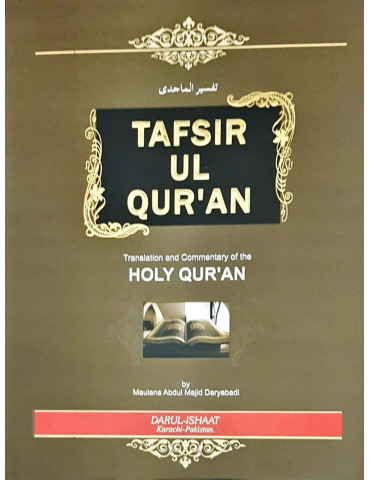 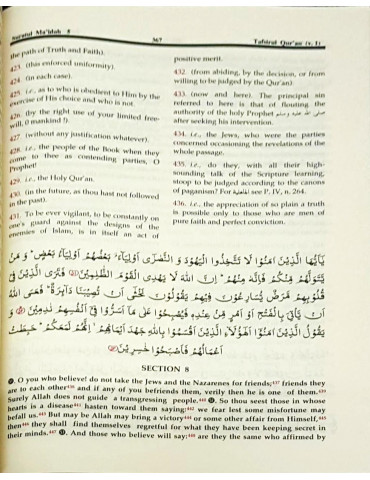 Abdul Majid Daryabadi's Tafsir al-Quran in 2 Volumes. In addition to presenting a truly faithful and idiomatic English translation which retains almost all the original Arabic syntax and word-order in its translation of the Quranic text, Daryabadis work represents as an admirable venture into comparative religion. Based on a thoroughly critical study of the Bible in particular, as also other major world faiths, anthropology and history in general, Daryabadi cogently demonstrates how the Qur'an stands out above other Scriptures which have been tampered with down the ages.

Another valuable element of the work is the elucidation of Islam which it provides-its life-giving articles of faith, its life-sustaining teachings and its life-enriching worldview in a manner best suited for the English speaking reading public.

The exegesis by Daryabadi throws ample light on all those peoples who have been mentioned in the Holy Qur'an along with their geographical locations and the eras in which they flourished. One can find all the necessary details about the earlier prophets who find a mention in the Holy Qur'an, since it Provides answers to such questions as what was the time of their advent, were the peoples to whom they disseminated the message vouchsafed to them who were the Adites and Thamudites and the people of Prophet Salih, where those people lived, where were Babil and Madyan located and similar other questions that arise in mind while reading the Holy Quraan.

The exegesis also demonstrates in the light of human experience and researches made in the field of anthropology and sociology the superiority Islamic social order and its legislations pertaining to marriage, divorce, inheritance etc., over all other social laws and systems. It shows how the Islamic injunctions represent the most refined and elaborate system of social existence known to the civilized world.

About The Author ABDUL MAJID DARYABADI (1892-1977), born in India, obtained his BA (honors) in Philosophy from Canning College, Lucknow. He published scores of books and articles in both English and Urdu, which bring out the excellence of Islam. Throughout his academic career he edited the Urdu weekly Sachch and then Sidq (1925-76), which was acclaimed in the Indo-Pak Subcontinent for its inspiring message and stylistic features.  In 1909 Through reading English books written by agnostics, he had turned from a good believer to a heretic, his  apostasy continued till 1918. At that time, he read the English translation of the Quraan  It convinced him that the Qur'an is no collection of hearsay stories, but a collection of deep and sublime truths.