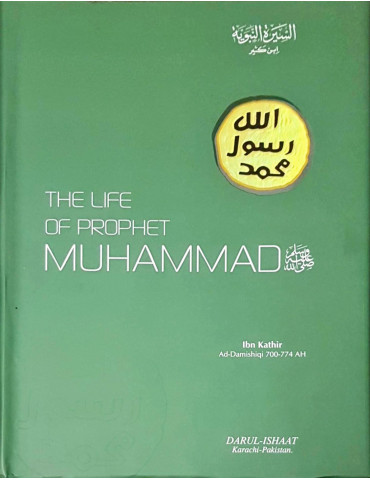 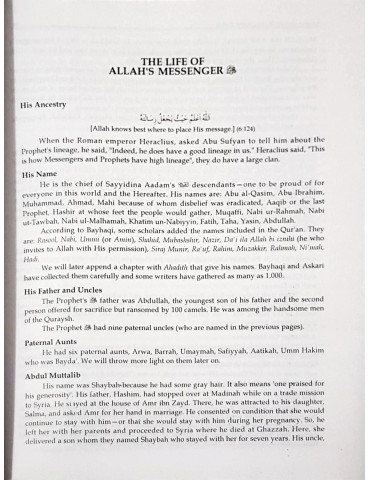 Life Of The Prophet Muhammad

The Path To Perfection - A spiritual anthology
Write your review

Allamah Ibn Kathir's Sirat an-Nabi  is a portion of his Al-Bidayah wa an-Nihayah. While it has been translated into Urdu, it's English translation was long awaited.

This work is comprehensive. It begins with the times before the Prophets Birth, reflecting on the conditions as they prevailed then, the adventure of Abrahah and his dialogue with Abd al-Muttalib, the Prophet's birth and his upbringin as an orphan. The surroundings, his journey with Abu Talib, his marriage and the first revelation.

Then follow the sequence of events, the uphill task of the Prophet and his few companions. His banishment, together with his tribe for some years in a social boycott and subsequent re-alignment. His Mi'raj and hijrah to Madina and the growth of Islam and liberation of Makkah.

We also read the treaty of Hudaybiyah and of the battles, and the redeeming Umrah and farewell Hajj. His final illness and passing also finds mention.

Also mentioned is his miracles. This is followed by how the Companions conducted themselves thereafter.

About the Author: He was Hafidh Abul Fida Ismail ibn Abi Hafs Shihabuddin Omar ibn Kathir ibn Daw ibn Kathir in Zar` the Quraishite' originally from Busra (Syria) and raised in Damascus. He followed the Shafi`ee school of thought. Ibn Kathir was born in the year 701 AH in an area called Majdal, near Busra, west of Damascus. His father died when he was only four years old and was taken in by his brother and moved to Damascus in 706. Here, he learned from great scholars such as Ibn Asakir, Ishaq ibn Yahya al-Amudi and the great Ibn Taymiyyah who was extremely close to him. He also studied under various other sheikhs who gave him permission in fiqh and Hadith. He made many academic contributions to Islamic sciences. The following are amongst his most prominent:

Al-Hafiz Ibn hajar Al-Asqalani said, ''Ibn Kathir lost his sight just before his life ended. He died in Damascus in 774A.H. May Allah grant him Mercy and make him amongst the residents of Jannah (Heavenly Garden).''

Life Of The Prophet Muhammad